I guess what I’m trying to say is, if I can change, and you can change, everybody can change. – Rocky Balboa, Moscow

In the world of Mage, and also on Liberation, reality is what people make of it. And the kind of reality that is made, determines what kinds of magickal effects are vulgar, and what kinds are coincidental.

The kind of Reality Zone the character is in will determine vulgarity. But there are a few tiers of zone. See Mage 20th pages 611-617 for the book’s fundamental overview of reality zones. What follows is an outline of how they work on this game.

The basic laws of the universe are virtually impossible to overcome. Hollow objects float and solid objects sink. Birds fly and stones fall. The sun shines and the moon rises. This is the Earthly foundational reality zone. On Earth, there is no escaping the shared belief that the world works a certain way.

The only normal way to avoid vulgarity penalties for such basic violations is to leave the Earth by going elsewhere, such as the Digital Web, a penumbra, the Hollow Earth, pocket realms, or someplace else.

However some Realms have rules and limits, and don’t treat all Foci equally.

There’s a reason the Technocratic Union claimed victory in the Ascension War: Most of the planet has stopped believing in Magick, to the point that Magick has stopped working in most of the world. The laws of science are the law.

However this is not the case to the degree that the Earthly foundational reality zone is real. It is possible for there to be hot spots that believe in alternatives.

“Localized realities extend from small areas (a house, a field, an underpass) to communities of several hundred people (a small town) or areas of several dozen miles. Higher populations – or really low ones – tend to lead a localized reality toward either Primal or Technocratic extremes. This localized reality syndrome allows mages to create Sanctums and Chantries, whereas Sleepers spread faiths, build churches, maintain cultural traditions, and use art, education, and technology to change their world in small yet significant ways.”

Urban decay, religions, borderlands and crossings, rural areas, regions of great faith, and areas of high resonance can create their own local pockets of reality. These are commonly thought of as “Reality Zones,” but in truth they are just a kind of reality zone that is rare and noteworthy. They stand out for being something other than the Technocratic Reality.

What about places where people never trod, or places where the Technocracy never managed to conquer? These places manage to keep the old, primal reality from before the modern era. These places are said to be in the Primal Reality zone. Deep Wildernesses, communities of deep mystical belief, and places of power like nodes and wellsprings all hold out against the Technocracy.

Mages, through force of will, are able to create their own localized reality zones in confined areas. A personal sanctum or laboratory is the result.

Reality Zones effectively have Foci. Some allow all Foci, such as most Umbras and the Primal Reality. The rest are restricted in some way.

Because Mage Foci are relatively open ended concepts, gauging the similarity of paradigms and practices is a subjective decision that must be made by storytellers. Players should use their best judgement in casual scenes, and ask for help when it’s important.

The larger a Sanctum is in dots, the more flexibility it has in paradigms. A large Chantry-wide sanctum might support several related Paradigms perfectly well, but a small personal Chantry might allow no deviation from its Mage’s owner.

Reality zones change per the book. See Page 616-617 for a list of ways to alter reality zones, and convince people to think your way. These sorts of actions will be implemented on Liberation as Influence Actions and will use that system.

Conceptually, the Terranorming section of The Operative’s Dossier pages 90-91 describes how one might alter a reality zone. However, the scale of Terranorming in time and space is so large, these rules and requirements are beyond the scope of Liberation MUSH.

Foundational Realities cannot be altered, unless operating within a small realm controlled by Player Characters. They are too entrenched. Earthly Reality in particular has far too much social inertia.

A Sanctum’s reality an only be altered by its creator’s force of will.

The Technocratic Reality however can be challenged, rolling it back to Primal Reality or even imposing an alternative. This is a difficult task though, and may face resistance.

Likewise the Technocratic Reality may be imposed, where it does not currently exist. Certainly any place currently harboring an alternative reality is being monitored and defended. 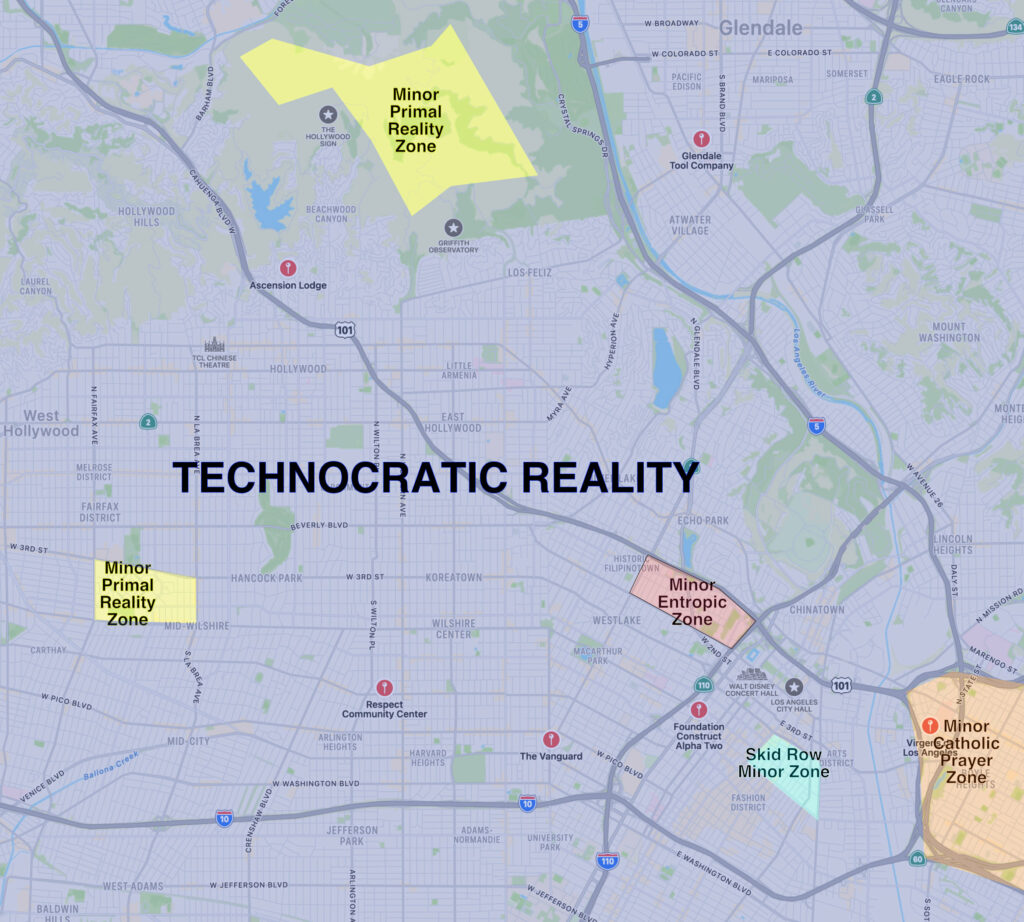 Map notes: Everything on this map is approximate; reality zones are based on popular belief and superstition, not neat street boundaries.

Sanctum-scope and other indoor-only reality zones are not listed.

Technocratic Reality rules over all of the above minor zones; the zones do not have full control

Not all things are known to Mages.