In the same vein as how Blood in Vampire is not handwaved, Glamour in Changeling is not handwaved. If you power Cantrips, you are expected to reduce your Glamour pool as is necessary and only increase it if you have undertaken one of the appropriate actions to do so.

There are five methods of Epiphany starting on page 260. The Five Rs. These are thematically different ways of getting Glamour from a Dreamer or from yourself. Epiphany rolls must be logged to a job. We do not handwave the spending and regaining of Glamour. Only Mortals (or non vampire Prodigals) with a Banality of 3 or lower are eligible as Dreamer. Getting a person down to these values safely is done via the Quest of Inspiration.

Where the book makes references to free gains of permanent glamour for 5+ successes where the Epiphany is in accordance with your Threshold, the rule about free Attributes (+bbread 2/23) is in place. You can buy it for half price. I have discussed this with Sun and we agree that if the Epiphany is particularly momentous further reductions may be applicable.

The long and short of this is that you inspire a mortal to excellence or greatness and when they do so, they create a wellspring of Glamour.

The first stage of Reverie is to bond with the Dreamer. Roll Perception + Kenning vs 8 to determine how long this will take. Each dot of Dreamers provides a +1 success to this first roll.

Once the necessary bond is established with the dreamer, you roll Manipulation + <an appropriate ability> vs 6. Empathy is the usual, Leadership; Performance; Intimidation may be substituted. You gain Glamour equal to your successes. If the roll fails, you can try again next week. If you botch, the ST rolls the Dreamer’s attribute plus skill and checks the results against the above chart again and the Changeling starts from the bonding step again.

Rapture represents a Changeling inspiring themselves, it requires the same roll as above, though does not benefit from Dreamers. Once the appropriate time passes, you roll the appropriate Attribute + Ability vs (6 + Banality - Glamour). You regain a number of Glamour equal to the successes rolled. 5 or more successes fills your pool entirely. A botch causes a gain of a point of Banality.

Ravaging represents the theft of Glamour from Mortals via psychic assault. It is unambiguously a violation. It can well destroy the mortal’s ability to create at all, the more they are ravaged the longer it takes to recover.

You don’t need to establish a close relationship with the target, just their name and their general inspirations. Roll banality vs 6 and gain Glamour points equal to your successes. If Ravaging fails, you gain no Glamour and a point of Banality. If it’s a botch, you gain a dot of Banality.

A Ravaging Threshold takes time and uses the same rules as Reverie.

Once per story you can perform your Kith’s Revelry in a scene. When Revelry ends, you fill your Glamour Pool

Rhapsody is forbidden everywhere. It is necessarily a breach of the Escheat.

You imbue 1 to 5 points of Glamour into a Mortal. Roll Manipulation + Expression for the mortal vs 7 adding dice equal to the imbued Glamour. The artist creates a masterpiece; two points of glamour per success are bound in this work. The character then needs to gain and destroy that art work to release the Glamour.

Kinain only naturally regain 1 Glamour a week (CtD pg 194).
Kithain are not eligible to buy their own Holdings, which means they cannot get an income of either Glamour or Dross without joining a Freehold or Mew
Kithain cannot Epiphany

Balefires produce up to their rating in Glamour or Dross or some mix between the two depending on how the Balefire was built.

Contract 5 allows Bestowments. One of the Bestowments available is a pool of Glamour which refills either in the morning or at nightfall, depending on the Court of the sponsor.

Any Wyrd Cantrip that is cost in the Autumn or Near Dreaming costs a point of Glamour unless you have Onvoked the Wyrd. 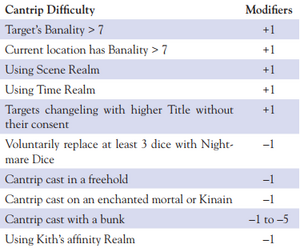 Bunking reduces the difficulty by 1 to 5 depending on its level.

You may, if you have three or more normal dice in your pool, replace three normal dice with Nightmare dice to reduce the difficulty by 1. Roll

The Roll for a Cantrip is the Art plus the lowest governing realm. If you have a Nightmare score, you must replace as many dice as you can with Nightmare dice. Nightmare dice behave normally save that any ten rolled on a Nightmare die adds 1 to your Nightmare rating.

There exists a +cantrip command. The footprint is
+cantrip[/n or /night or /nightmare] Art + Realm vs difficulty
This will automatically track nightmare dice.

Spend two points of Glamour.
Add one to your Nightmare rating.
Define your intent with the Art.
Roll Nightmare + Permanent Glamour.
If you botch: You gain an Imbalance (but do not reduce your Nightmare rating), suffer a banality trigger, you cannot spend Glamour or use Arts for the remainder of the scene. Havoc occurs around you.
If you fail: You suffer a banality trigger and cannot use the Unleashed art for the remainder of the scene.
If you succeed but gain successes less than or equal to your level in the Art: The Unleashing works as you intend.
If you gain more successes than your level in the Art: You Unleash and your intent is fulfilled but in a twisted manner.


Because of the propensity for Unleashing to go wrong, as your Nightmare pool gets higher, the chances that you will end up in the last category of Unleashing increases.
+unleash <art name> will do all of the heavy lifting for you.

If you have an Imprint note (per page 143 of the Player's Guide) that has been approved, it is considered active for the entire scene. As Imprinting requires a dialogue between Director and Player, they will require an approved note. It is expected that players will do the work for these (it takes some paperwork and some rules knowledge) but Imprints are not a right and they should not be considered a given.

The banality of a room is equal to the average banality of everyone in the room unless the build belongs to an implicitly very banal person or organisation. In which case the banality is expected to be much higher.

Banality is a contagion. This is the mechanism by which it spreads as spelled out in the section Where Angels Fear to Tread.

Any time your Temporary Banality hits 10, you are expected to put in a +request to increase your Permanent Banality.

Proactive steps can be taken to reduce ambient banality but they require caution and protection of the area. Any relying on chimerical effects (Spring 1) will not survive exposure to high banality Prodigals (especially Vampires, who sap Glamour) and so they must be kept out. Pyretics 3 can help burn out ambient banality but does not require a persistent Chimerical effect, it does its thing and then goes. That said, you will still have to prevent the place from constant exposure to higher banality Prodigals.

Pg 268 establishes that any scene you spend in a structure that has more banality than your Permanent Glamour gains you a point of temporary Banality. This is not a Banality trigger, it is just a straight gain.

Any time you are presented with a general banality trigger or your Antithesis, you need to roll Glamour vs 8. You cannot spend willpower on this roll.

Any time you could gain a point of Glamour, you can instead opt to lose a point of temporary Banality. This is done on a point for point basis.

Questing may be undertaken to reduce permanent Banality. They are described starting on page 271 of the Core.

Permanent Banality Losses in the Far and Deep Dreaming are temporary. You regain all of your permanent banality when you return to the Autumn World. (pg 300, Banality Purification System)

Pyretics 5 can be used to literally burn away Banality. This does aggravated damage.

Nightmare represents the character’s descent into Bedlam. Any time your character rolls permanent Glamour or rolls for a Cantrip, you must replace a number of dice, up to your Nightmare rating but not exceeding the pool’s value, with Nightmare dice. These dice act as normal dice except where they roll 10s, then they add one to your Nightmare pool.

Any time your Nightmare pool reaches 10, you gain a point of Glamour and mark the rightmost free Willpower as Imbalanced. Any time you spend an Imbalanced Willpower, you suffer a Bedlam Threshold for a number of scenes equal to the number of Imbalanced Willpower you have. Each Threshold imposes a mechanical penalty as well as causing the Dreaming to run rampant within you. You may suggest a Bedlam Threshold, but they are ultimately chosen by a Director.

Any time you successfully Epiphany, you may instead remove one Imbalance in lieu of regaining Glamour.

When all of your Willpower becomes Imbalanced, you are lost to Bedlam and your character is rendered unplayable.

Any meaningful relationship between the spheres should be cultivated carefully and with, if not the oversight of, the inclusion and informing of the Director Chain. If we do not know that it happened, there is a non zero chance that it will just be retconned if it conflicts with established plot. There is at least one sanctioned established cross sphere plot as of the writing of this document.

There are ancient treaties between House Fiona and the Fianna, but most of them have been forgotten. There are ancient enmities between the Get of Fenris and all Fae, because some Fae were less than their best selves. By and large, the relationships are dangerous, Garou exude violent and dangerous Glamour. But, where properly cultivated, they are the most rewarding.

The Werewolves and Fae share an ancient enemy in the Fomorians. The Fianna, in particular, fought in the Tessarakonta during their immigration to Ireland.

In the time before the Interregnum, there were Freeholds that were shared with Garou . Tara, the capital of prehistoric Ireland is one of the canon listed ones. It is ambiguous, even to people with high Gremayre, as to whether it was the case that Garou Freeholds and Fae Freeholds occasionally geographically overlapped in the Autumn world.

More ambiguous is the relationship between Changelings and Mages. Some Mages can be trusted, but it is not as simple as “the Etherics good, the Technocrats bad”. Members of every school have, at times, provided aid to and fucked over Changeling society. During the Interregnum, Mages were invaluable to House Scathach’s endeavours to keep what remained of the Silver Path in tact; however other Mages ravaged Balefires as the Awakened magic suffered from their version of the Sundering.

The first thing to note about Vampires is that for every day in contact with one, a Changeling loses a point of Glamour. While in the presence of a Vampire, Changelings cannot respire Glamour at all.
There is division in fae society about whether they are agents of Banality or whether what is perceived as Banality is actually just dark Glamour. What is, however, known is that they quickly become addicted to fae presence and drain every drop of Glamour out of the Fae that they can.
Particularly inimical to the Fae are the Tremere, the Kisyad, and the Ravnos. Avoid such Vampires at all costs.